Best time EVER to Skedaddle to St. Petersburg: May 5 – 10th incorporating Victory Day which is always celebrated on May 9th and Russians often take a weeklong Spring holiday ending on May 9th. Plus the entire city is festooned with national flags, and banners of all sorts displaying the holiday’s orange and brown stripes

… AND we had amazing weather: crystal blue skies, bright sunshine and high 60 degrees with lovely breezes. Vanished from my mind were expectations of grey, dreary, drizzly skies with people only out and about when necessary. In fact, many families and older folk leave town for their dachas and beaches and the city is flooded with an abundance of lovely young people who relaxed outdoors enjoying the tremendous public parks with couples everywhere; walking, sitting, cuddling, kissing, and laughing. This is also apparently a choice week for weddings. 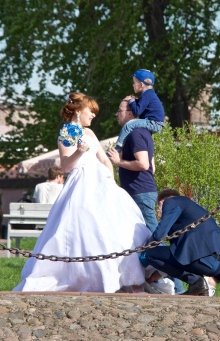 Also during the week, military divisions practice marching for the May 9th main event – so many photo ops. 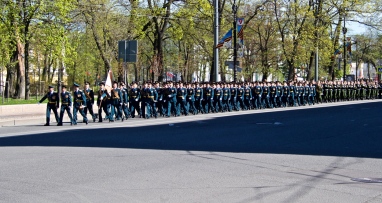 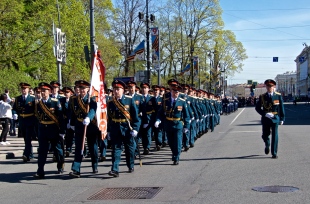 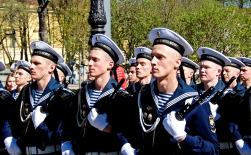 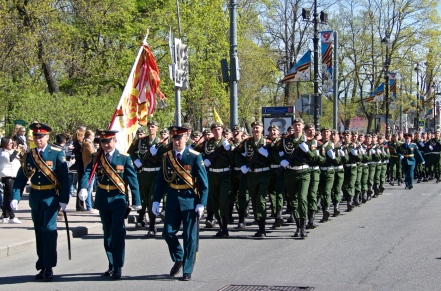 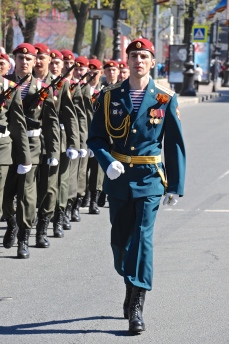 Once revelers return for the May 9th main event, Victory Day 1941-1945, the entire city turns out in full as they celebrate and memorialize those many millions who perished during the siege of Leningrad and WWII. Victory Day feels like our Memorial Day and Veterans Day rolled into one and it is a dawn to night series of events: VIP grandstands are erected in Palace Square where a show of military force parades by …

… and every street leading to the square is jam packed with spectators. 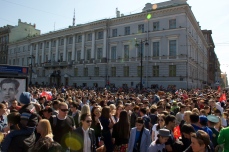 Several hours later a second parade of remembrance takes place where children, grandchildren and great grandkiddos march while hoisting placards of photos of their loved ones who perished. The enormity of the tragedy transcends time and remains palpable today … wars bind us all and should remind us of the sanctity of life, but alas …

Later at dusk, the torches on the Rostral columns, lit earlier, become beacons … 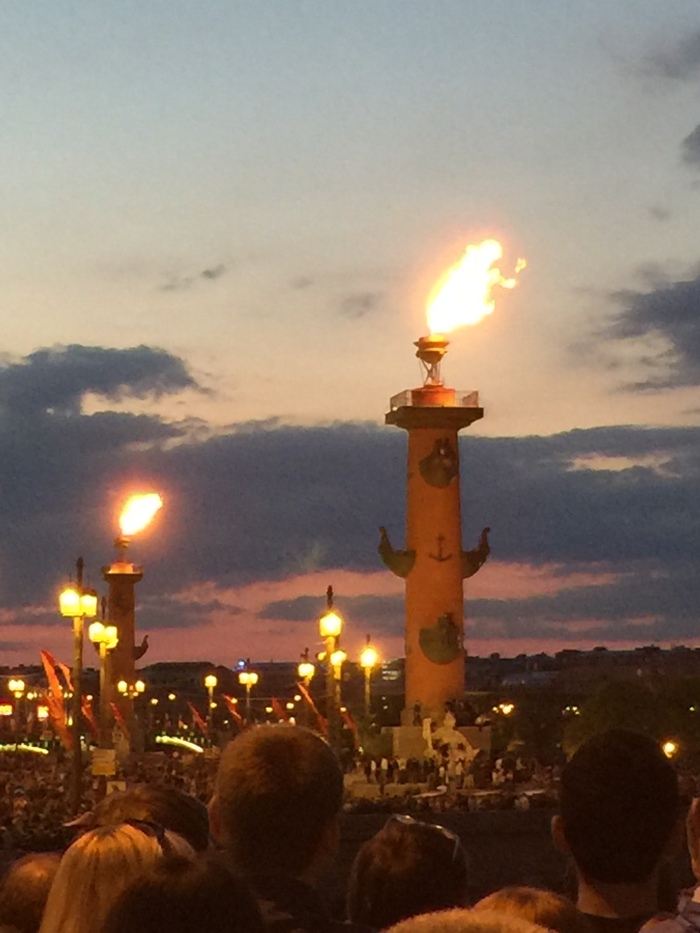 … the spectators pack the bridges and embankments as well as boats on the Neva in anticipation of the popular finale: fireworks as the Russians shout “OOOOO-RAHS” to every burst of color 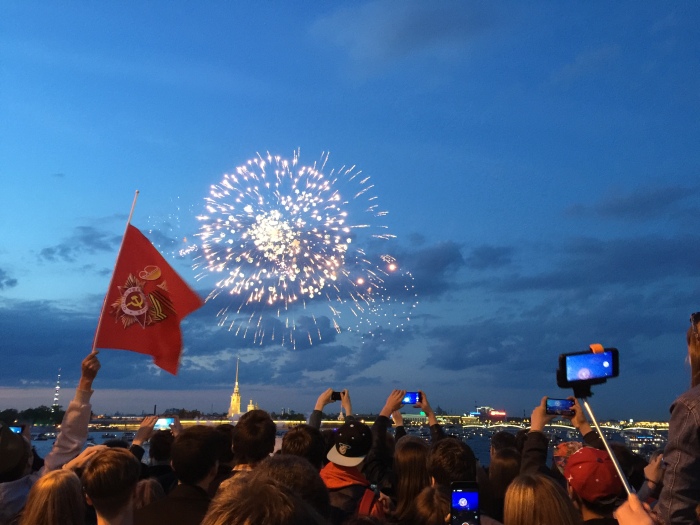 En route back to the Renaissance St Petersburg Baltic Hotel, a Marriott Hotel on Pochtamtskaya Ulitsa next to St Isaac’s Cathedral, I snapped this magnificient landmark 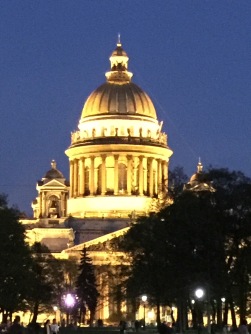 What a heady day. Next year, 2017, should be interesting as Russia “celebrates” the centennial of the Russian Revolutions, the first of which occurred in February 1917. It should be a banner year for spectacular events and perhaps worth being a part of …

Several notes to those who either have not been to St Petersburg or who traveled there during the “cold war”. The Pulkova airport is small and efficient and not very busy so we were processed very quickly. The roads in May are fabulous as they are resurfaced annually after winter due to frost heave damage. There are very few foreign tourists during this time. The city is SPOTLESS and drivers are polite and defer to pedestrians in crosswalk who reciprocate by NOT jaywalking, EVER! The city is HUGE with many parks, rivers, bridges and canals intersected by very wide avenues. If you are a walker, this is your city: in one day we covered 12 miles and had hardly made a dent! In my mind, the few elements lacking: sidewalk cafes and places to dine casually al fresco. There were NO LINES to the Hermitage – seriously! The flat sightseeing boats plying the waters of the Neva and city canals were ubiquitous – most narration is in Russian. Speaking of which, all signs are in Cyrillic which can be a significant source of confusion easily mitigated by a good map.

We love Russian food so for us, St Petersburg was a delight. Want a vodka experience? Dine at “Russian Vodkaroom No. 1/Russkaya Ryumochnaya No. 1” on Konnogvardeyskiy and try their horseradish vodka!

Yes, I too thought they were “messing” with me with this glass!

How about a dining experience with a killer view of St Isaac where the cocktails and food are great too? Take the lift to the 6th floor “Mahcapga” (pronounced Mansarda) which just so happened to be across the street from our hotel (lucky us!) on Pochtamtskaya

And if you want to have a high end, intimate dinner that felt very European along the Moyka Embankment on the canal …

… try “Dom”, no more than a quick sprint around a couple of corners from the hotel, also recommended by our concierge, Natalya.

A word about concierge services: Natalya was fabulous! In addition to dining recommendations, she directed us to a side entrance to the Hermitage for use by hotel guests which would have saved us a great deal of time if there had been lines. She went way beyond the call of duty trying to assist me in obtaining a contact at the former Imperial Medical Academy without which access is impossible. She, and all staff at this boutique hotel, was friendly and very helpful. Consider staying there as the location is wonderful and buffet breakfast is plentiful and fresh: we had a view of St Isaac’s from our room located in the front of the hotel where the rooms were larger with high ceilings.

There is so much more I wanted to say about St Petersburg because in part, for me at least, it was genealogically a going home event. Instead of words, I’m tossing in a few extra Travel Log type images … I hope you enjoy them as much as I enjoyed taking them!

Finishing with Church on the Spilled Blood, marking the site of Tsar Alexander II’s assassination in 1881 which is actually a memorial building and not a “church” per se

… and St Peter and St Paul Cathedral on the island fortress built by Peter the Great where most of the tsars are entombed – the bell tower is the world’s tallest Orthodox bell tower. Tsar Nicholas II and most of his family and a few servants were belatedly laid to rest on July 17, 1998 (the date marking 80 years after their murder) in the Chapel of St Catherine the Martyr …

Hope this was fun for you … join me on Next Skedaddle … to Vilnius, Lithuania!

kate stillwell Hi! I’m Kate. June 8th, Alexa, new grad from “The U”, and I will start our 2,190.3 mile E.P.I.C. SOBO thru-hike and blog up, down and around the trail. We are stoked! As if the AT isn’t hard enough, Alexa’s vegan so our 22 resupply food boxes have been a ginormous challenge! We’ve lined up amazing Trail Angels (Sarah VT, Deb NY, Linda & Ed PA, Joyce MD and Nancy NC) who want to bless us with TLC as we wend, stumble, slip, slide and fumble (with style & grace) our way from Maine to Georgia. Alexa is passionate about nonprofits and so created: “Hiking for Nonprofits” where FOR profit companies sponsor our hike with 100% of the $$$$ going directly to nonprofits organizations. Annapolis Subaru stepped up immediately and pledged funds for the Chesapeake Bay Foundation (CBF) as did Belair Produce who are sponsoring on behalf of Heroes of Tomorrow (HoT) and Maryland Federation of Art (MFA). Please visit their websites and support them all. When all is said and done we will see if we are “Stillwell”. Wanna read more stuff? Check out my blog: www.JustSkedaddle.wordpress.com/ Instagram: @Just_Skedaddle and Alexa's Instagram: @hikingfornonprofits My WEBSITE: www.KateStillwellPhotography.com My Twitter: @viewsnap SPONSORS & SPONSOREES: http://www.annapolissubaru.com, for http://www.cbf.org , http://www.belairproduce.com, for http://mdfedart.com, and http://www.heroesoftomorrow.org
Published June 9, 2016October 10, 2016

4 thoughts on “The St Petersburg Skedaddle”